A recent report on US housing market trends shows that apartment occupancy rates have reached the highest level seen in 20 years.

RealPage (a real estate software and data analytics company) reported that the summer season has brought with it a major increase in national apartment occupancy rates. The market research shows that in May, apartment occupancy went up to 96%. This was a jump of 60 basis points (bps) from April. This is the highest occupancy level the nation has seen in this sector of the real estate market since 2001.

Nearly all major apartment rental markets in the US saw an increase of at least 10 bps in occupancy. The only major city to see a month-over-month (April to May 2019) decrease was Milwaukee, WI. The Boston real estate market had the highest apartment occupancy rate (96.8%) compared to larger US markets.

Average Annual Rent Growth Is Up 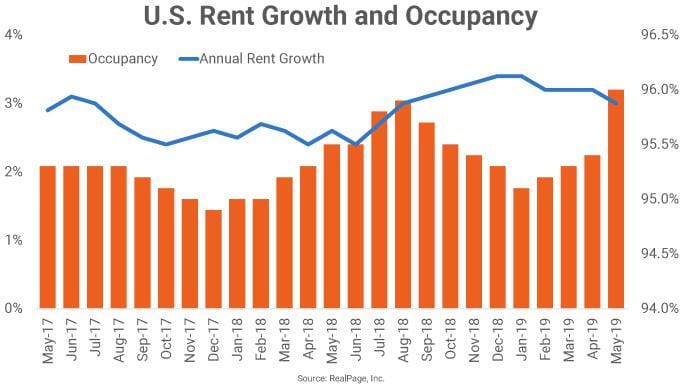 In May, the average rent was $1,394 for the 150 US apartment rental markets. RealPage reports that the Las Vegas market is one of the leading apartment markets for annual rent growth (up 320 bps year-over-year) followed by Phoenix, Austin, and Raleigh: 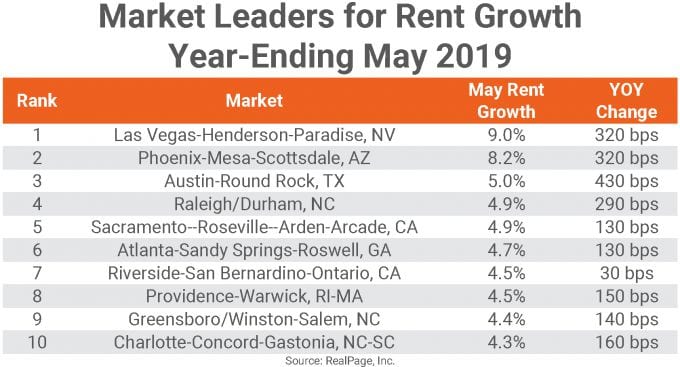 Demand Levels in the Apartment Rental Market Are Healthy

Naturally, apartment occupancy rates are up because of the high demand in this market. In May, the monthly absorption stood at 119,605 units. This was actually the highest single month absorption since 2010. April through September is considered the hot season for apartment rentals as most yearly leases are signed during this period, but the 2019 season is off to a great start. The combined absorption of April and May (162,450 units) was the highest for the start of the season since 2010.

This demand is being met with supply. As of May, more than 426,000 units are under construction in the US real estate market.

As we are moving through the season of apartment leasing, it’s a smart move to quickly get your hands on an apartment rental now. Even though most cities are showing high occupancy rates across the US, be sure to perform a real estate market analysis to ensure you’re investing in the best place for apartments.

You will also need to move fast in your purchase to be able to prepare the rental property and get it ready for leasing to be able to start enjoying cash flow this season. However, do not skip out on an investment property analysis.

If you want to get all of this done and start renting out an apartment and enjoying high occupancy rates, sign up to Mashvisor now. With Mashvisor, you can quickly find and analyze investment property anywhere in the US.

Data Shows the US Housing Market Is Heating Up

House Flipping Profits in Q3 2022 Down Vs. Previous Quarter

Current Mortgage Rates on a Wild Ride, Now Up at Least 0.12% vs. Last Week

Experts Forecast Adjustable Rate Mortgage to Grow in Popularity in 2022