8 Places Where Rent Control May Be Established in 2021

This article will help you answer these questions.

But first, what is rent control?

This term broadly defines legislation in a city or state that places a ceiling on the maximum rental rate landlords can charge for their units, as well as a limit on the rate of rent increases per year.

Related: Rent Control and How It Affects Your Real Estate Investment

While 37 states in the US  have rules that preempt such measures either by Dillon’s rule or other legislation – forbidding local governments to implement control over rent, 182 municipalities have rent control regulations. By states, these include New York, New Jersey, District of Columbia, California, and Oregon. With Covid-19 pandemic eviction bans expiring and real estate price increases across the US housing market 2021, lawmakers in some states are considering repealing existing rent control bans. Some of the states where rent control may be established in 2021 include: Minneapolis, Maryland, Colorado, Massachusetts, Nevada, and Illinois. 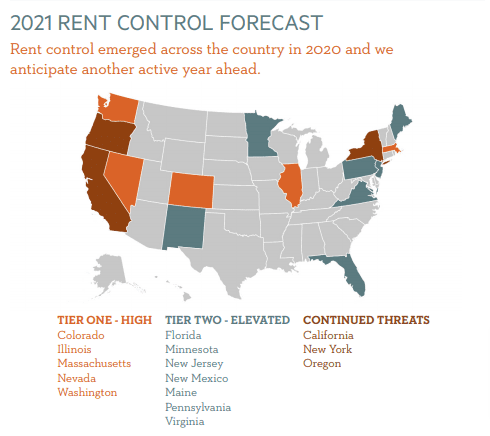 Next we’ll be looking at the states where some regulations already exist as well as states that have shown intentions to introduce laws to that end. Moreover, for each state we will show you Mashvisor’s real estate data on the average performance of traditional rentals so that you can evaluate where this is a good location for your investor goals and purposes. 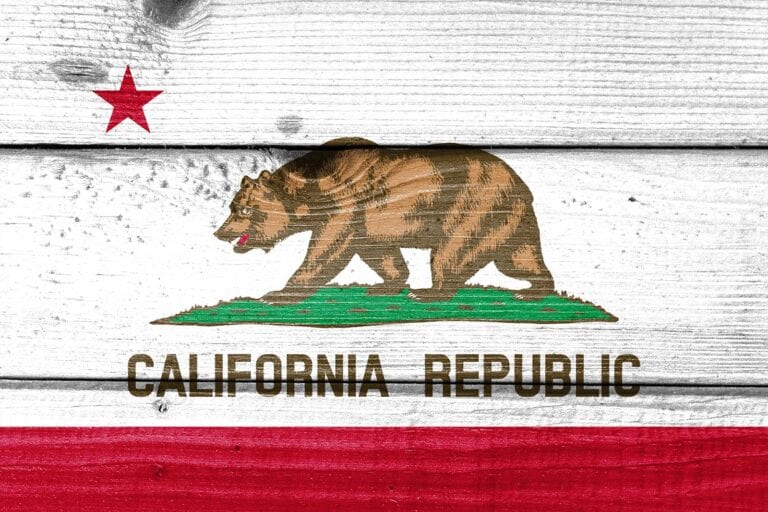 California is one of the states with existing rent control laws

Late last year, a vote was held to expand rent control in California. But it was defeated as people in many cities in the California real estate market voted against further rent control. According to the NMHC (National Multifamily Housing Council), Proposition 21 would have allowed cities and counties in the Golden State to apply more types of control to more properties than possible under the currently existing law. California was the second state to pass statewide rent control laws in 2019 with cities like San Francisco and Los Angeles having passed their own laws in this regard since the late 1970s.

In the California housing market, the current law under AB1482 (Assembly Bill 1482) doesn’t apply to single family homes and condos, new builds under 15 years old, and duplexes where one unit is occupied by the owner.

The law states that landlords can’t raise annual rent by more than 5% plus the local rate of inflation, and rent increase is capped at 10%. The law will be retroactive till March 19, 2019. Current statewide rent control is set to expire in California by 2030.

Oregon was the first state to pass a statewide rent control law in early 2019. Late last year, Portland took the same type of ballot initiative to expand such laws. But unlike California, voters favored more control over rent. In Portland, rent increases are capped at the rate of inflation. Additionally, this new measure demands that landlords give their tenants at least a 3-month notice before starting eviction filings.

In Oregon, statewide, renters cannot raise rental rates more than 7% plus inflation annually. Overall rent increases are capped at 10%. Oregon’s rent control laws only apply to multi-family buildings aged 15 years or older whose rent is not subsidized by the government.

Under rent stabilization, the rent guidelines board determines how much the landlord can charge for rent in buildings older than 40 years (built before 1974) with 6 or more apartments. According to Bungalow.com,  increases have been between 0% and 4.5% per year in the last 10 years.

While Minnesota is one of the states preempting rent control, there may be future votes on whether or not such a measure could be adopted in different cities. On February 26, 2021, the Minneapolis city council gave preliminary approval to two amendments to the charter controlling rent that may give the city the power to impose rent stabilization laws or put rent control on a future ballot for the Minneapolis real estate market.

It is not going to be easy as a 1984 Minnesota constitution prohibits local government from adopting rent control except it’s approved by voters in a general election. Yet, if such measures work in the Minneapolis housing market, it would only be a matter of time before other Minnesota municipalities follow suit.

The Maryland housing market currently has no statewide law governing rent. But in April 2020, during the Covid-19 lockdown, Montgomery county, implemented a temporary measure that lasted till February 5, 2021. Under that law, landlords in Montgomery County in the Maryland real estate market could not raise rents beyond 2.6%, and tenants had to receive a 90-day notice of rent increases. However, in the incorporated city of Takoma Park, rent control has existed since 1981 as one of the city’s ways of providing affordable housing.

Currently, there is a new rent stabilization bill for Montgomery county as a whole. Bill 52-20 aims to institute rent control laws for non-controlled properties near rail and bus transit stations. The rent cap would vary yearly based on average inflation in the whole Washington Metropolitan Area.

Colorado’s existing laws preempts controlling rent in any local jurisdiction. However, in 2019, some state legislators introduced a bill to repeal the rent control ban and allow local governments to establish their own measures in the Colorado housing market. This bill ultimately failed, but the bill’s sponsors promised to take up the efforts in the future. With democrats controlling both the House and the Senate and rent price increases in college towns like Fort Collins an Denver, we could see policymakers bring up rent control again.

Illinois had banned rent control since 1997. The law prohibits any Illinois city from enacting any form of rent regulation. Similar to Colorado, a 2019 bill in favor of such measures, calling for the ban to be lifted, failed. We might see further efforts by lawmakers in favor of regulations.

DC’s 1985 rent control laws (amended in 2010) restrict annual rent increases to 2% above inflation for any building built before 1975. Yet, this law exempts most rental units. Exemptions include federal or district subsidized housing, houses built after 1975, properties owned by a person (not a corporation) who owns no more than four rental units in the District, and houses that were vacant when the Act took effect. As it stands, there are calls for more expansive measures in DC.

So there are the 8 states where rent restrictions might become a dominant force in 2021. If you’re thinking of buying a rental property in any of these locations, make sure to account for this possibility in your investment property analysis. In this way you will be able to ensure positive cash flow and good return on investment (in terms of both cash on cash return and cap rate) in the years to come. If you need some extra helping in analyzing the investment potential of income properties across the US market, sign up for a 7-day free trial of Mashvisor.

While the idea behind boosting affordability by controlling rents is good, economists believe that the effects of rent control include reducing housing stock, thus creating a shortage in multifamily housing which could exacerbate the housing crisis. It seems that a better option would be for the government to provide more incentives for players in affordable housing while creating more pressure towards inclusive zoning. What do you think? Drop your thoughts below.

Agnes A Gaddis specializes in writing insightful and confident content for businesses. She appreciates the ability to express valuable and timely information to people who need it and the reactions she gets from that. She is a contributing writer for several websites including Inman, Texas state affordable housing corporation (Tsahc), Getresponse and Influencive.

Airbnb Atlanta 2021: Should You Invest and Where?

What’s the Deal with the Current Housing Market in the US?

How Does the US Housing Market Forecast Look for the Second Half of 2017?

What Are the Expected Residential Real Estate Trends in the US Housing Market for 2018?

How Do You Find a Buyer’s Market in the US Housing Market in 2018?

US Housing Market Predictions: What’s to Come in 2019

Read Now
: Are You Ready for Buying an Investment Property?