The Amazon HQ2 Decision: How It Will Impact US Housing Markets

There is a lot of debate at the moment about the choice for the new Amazon HQ2 location. One thing most experts agree on, however, is the impact a large company like Amazon can have on the US housing markets it touches.

From New York to Seattle (the current home of Amazon headquarters), let’s take a look at how this decision will impact the real estate market. If you’re wondering if and where to invest to take advantage of these Amazon HQ2 cities, keep reading as we explore the best places to invest in real estate for the coming year.

Two US Housing Markets Will Become Home to Amazon HQ2

Amazon announced early in November 2018 that its new headquarters would be split between two locations: Long Island City, New York and Arlington County, Northern Virginia. The budget for Amazon HQ2 of $5 billion will be divided between the two locations. While the company has said the headquarters will be completed over 15-17 years, Amazon hopes to have at least 500,000- 1 million square feet of office space ready by 2019. 25,000 high-paying jobs will be created in each location, boosting the job markets and economic health.

Nashville was also announced as a new distribution hub, set to receive 5,000 high-wage jobs. Amazon also has plans to build more office space in Seattle and says that even with the new HQ2 locations, Seattle will still remain a focal point for the company.

Here are the real estate market trends that are bound to follow with these new announcements as Amazon HQ2 settles down in its new homes.

Job growth can have a profound effect on US housing markets which is why real estate experts watch it so closely. If we reflect back on the “Amazon Boom” of the Seattle real estate market, we can see the serious house price appreciation that happened. According to historical data from Zillow, house prices have appreciated a whopping 73% over the past 5 years alone. While this rise can be attributed to various factors, Amazon’s headquarters no doubt take the leading role as more than 40,000 jobs have been created since 2010.

Even looking at a company as large as Apple for comparison and its effect on US housing markets, we see a similar market trend of price appreciation. Since 2013 when the Apple headquarters was approved by the City Council, real estate listing price has nearly doubled in the California real estate market of Cupertino according to historical data.

So, it’s not a leap or a guess to forecast that serious home price appreciation will occur in the neighborhoods of and around Amazon HQ2. While some real estate investors are expecting this increase in property value to come immediately, experts say it’s likely to come over the years. This is because new Amazon employees won’t be coming into the locations all at once, but rather over the span of a few years. Still, there is a high possibility of significant home price appreciation nonetheless.

As we watch this real estate market trend unfold, we will also have to keep an eye on the housing inventory. The rise in property value will naturally be affected by the ability of the local inventory to cope. When it comes to Long Island City real estate, for example, a recent development boom has left hundreds of vacant rental properties ready to meet the demand from new employees coming into the city. Essentially, whether or not the Long Island or Arlington real estate market follow Seattle market trends will depend on the ability of their housing inventory to meet the demand. Still, this means good things for landlords looking to rent out property as they will soon find tenants who can afford to pay higher rental rates.

Experts say that many of the new Amazon employees won’t be looking to buy homes in these locations. Instead, they will opt to rent, driving demand for rental property in the Arlington County and New York real estate market. This means that even if real estate investors have to wait some time to realize property appreciation, they can enjoy rental income in the meantime.

Looking again to Seattle’s history with Amazon headquarters, we see rental rates spiked over the years of job creation. Zillow data shows that over the last five years, rental rates have gone up 31%. Again, housing inventory will play a huge role in whether or not rental rates will spike immediately. However, with the increase in demand from higher-paid employees looking for rental property, owning investment property in Amazon HQ2 cities will mean high rental income with steady occupancy rates.

Interest from Other Major Companies

Besides the direct impact of the new Amazon headquarters, it’s also speculated that other major companies will soon take interest in these East Coast cities as well. It’s likely competitors or startups will follow Amazon as the Long Island City and Arlington County real estate market become job hubs.

Besides larger companies, the neighborhoods surrounding the Amazon HQ2 are likely to see a revival with new restaurants and shops. All of this is positive for real estate investors who own or are looking to buy investment property in these areas.

Following Amazon HQ2: Where to Invest in Real Estate

Real estate investor interest has shot up for these US housing markets and you need to act fast to get in ahead of the competition. To ensure you benefit the most from the impact of Amazon HQ2 on real estate property, you need to know exactly which neighborhoods offer the best return on investment (ROI) right now. These neighborhoods are the ones that will start making you money, allowing you to benefit in the long run from appreciation and rental rate increases.

Some executives and employees will be looking at the neighborhoods directly near the new headquarters. This includes areas in both Alexandria and Arlington, VA which has now been named National Landing as well as Hunters Point in Long Island City near the East River. With the data below from Mashvisor, you can see what the average investment property will bring you in each neighborhood.

Click here to start looking for and analyzing investment properties in the neighborhood of your choice.

Keep in mind, however, that others will spread out for affordability even if it means longer commutes. To find investment properties in the neighborhoods near Amazon HQ2 right now in New York or Northern Virginia, start your 14-day free trial with Mashvisor and get access to our property search tools. 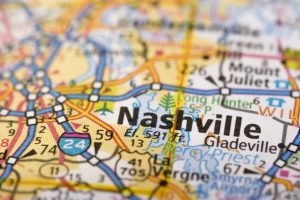 While the Nashville real estate market won’t be able to boast the title of home to Amazon HQ2, it did win something else. Amazon announced that Nashville will be a new distribution hub, with plans to create 5,000 jobs in the market. And while the effect won’t be as large as it is for the new Amazon HQ2 cities, the Nashville housing market is sure to get a boost from this promised job growth.

Certain Nashville neighborhoods will see house price appreciation and an increase in rental property demand. Rental rates will follow as well. However, it depends on how Amazon recruits these jobs. The company has stated they will be hiring locally and from other regions, again, over the span of a few years. So any changes in the Nashville real estate market are unlikely to be sudden. Still, with the local booming economy, this new promised job growth will reflect positively on the market in the next few years.

Related: The 7 Best Nashville Neighborhoods to Invest in Real Estate for 2018

Looking at the data below from Mashvisor’s investment property calculator for Nashville, we see the market is already doing well. Buying an investment property in the city will prove to be a good choice that you will continue to benefit from in the years to come.

To start looking for and analyzing the best investment properties in your city and neighborhood of choice, click here.

Will the Seattle Housing Market Suffer from the Amazon HQ2 Decision? 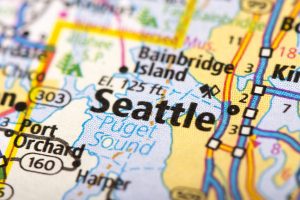 The Seattle real estate market has already been cooling down as we move into 2019. With the release of the PwC Emerging Trends in Real Estate 2019 Report ranking the Seattle housing market in 16th place for markets to watch compared to 1st place last year, experts are talking about how the Amazon HQ2 decision will impact the market further.

The major concerns are as follows:

Exploring the first major concern, the likelihood that Seattle employees will opt to move to the new locations is unlikely. While some employees were refraining from buying property in Seattle due to the high median property price of $811,990, it was in hopes that the new headquarters would be located in some of the other nominated cities where prices are much cheaper. But because both the New York and Virginia real estate market already have high prices which are likely to rise, these employees will probably stay put. As the Seattle housing market cools down, it will probably be easier for them to finally break into their local real estate markets.

As for the fear that job expansion from Amazon will be neglected in Seattle, this is yet to be determined. However, Amazon has revealed plans to build office space that will be on the scale of HQ2 right in Seattle. This will likely bring with it more job opportunities in the next few years, keeping the health of the market up.

As of now, there seems to be no real reason for Seattle real estate investors and homeowners to fear significant changes in their market due to the Amazon HQ2 announcements.

It seems the impact of the Amazon HQ2 decision will have a widespread effect on different neighborhoods and US housing markets. One thing is for sure- if you get ahold of an investment property in these areas, you’re sure to benefit from this company’s big move.

Related: US Housing Market Predictions: What’s to Come in 2019