Mashvisor, a real estate data analytics company, conducted an analysis of Airbnb data for over 300 US cities from March to

September 2020. The analysis reveals that the Airbnb market is in recovery on the national level, despite the lingering presence of COVID-19.

Back in March 2020, figures representing Airbnb performance witnessed severe drops month-over-month and year-over-year across the nation as a result of lockdowns and travel bans.

While many have since speculated that the coronavirus would bring Airbnb’s golden era to a complete end, many hosts are back in business and making money again. On average, Airbnb occupancy rates have gone up by 13% since they fell in March 2020. With occupancy recovering, rental income and daily rates are back up as well by 28% and 11% respectively. 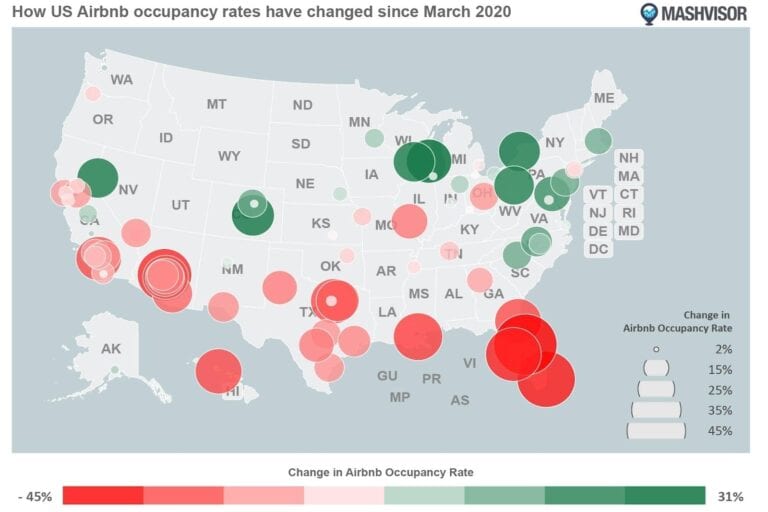 Of course, not all of the nation is enjoying the same swift re-emergence of the short-term rental property. Airbnb occupancy rates have actually continued to drop across the South, most notably in the following states:

The Midwest has come out on top in terms of Airbnb recovery in the second half of 2020. Airbnb occupancy rates generally rose across the region, most notably in the following states:

Maine leads the Northeast in Airbnb occupancy rate recovery, up by 49%. West Coast states have been slower to recover, likely due to a combination of the wildfires and rising COVID-19 cases. Washington (+14%) and Oregon (+15%) are the only two West Coast states that have experienced a significant increase in occupancy rates during the noted timeframe. 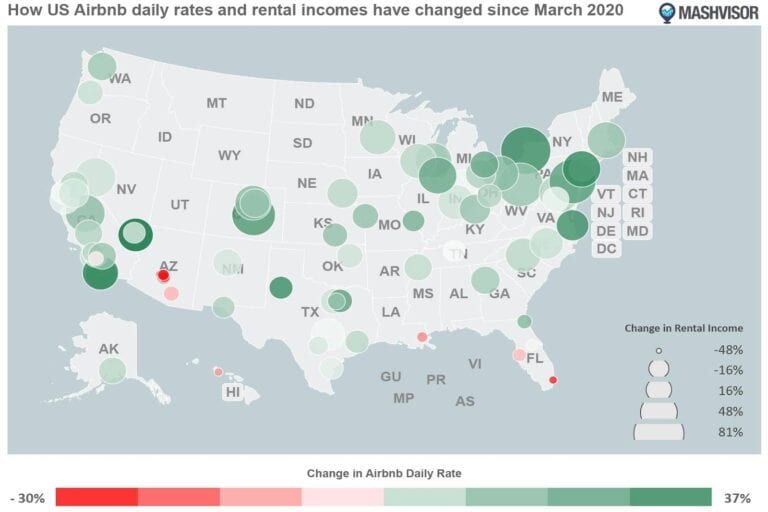 Generally, Airbnb daily rates and monthly rental incomes are faring better across the nation than occupancy rates. Buffalo, New York witnessed the highest rise in monthly Airbnb rental income, by 81%, among cities with a population above 250,000. Following Buffalo are:

For Airbnb daily rate recovery, Henderson, Nevada was the leader, with a growth of 37% followed by:

Mashvisor’s Airbnb database dates back as far as 2014 and includes data on Airbnb listings (close to 2 million) across the US real estate market, including their calendar bookings, host info, reviews, and more.

A daily analysis is conducted on all active listings to calculate occupancy rate, daily rate, and monthly rental income. City-level data is then generated by taking the averages of the data for all listings in the city.

Study: The Impact of Airbnb on the Hotel Industry

Home Prices Fell During COVID-19 in These Cities